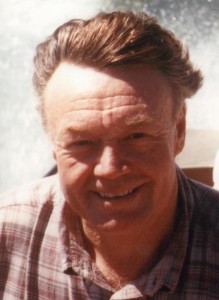 I met Terry when I was 7 years old and he was 20! He took time out to play and we had such fun. He brought us a puppy – Great Dane cross German Shepard-amazing dog we had for nearly 13 years. I remember a day when we all went to a nearby lake for the day. We were eating watermelon and he was skimming the rinds across the lake singing ‘My boomerang won’t come back’. Made me laugh and I always remember that day when eating watermelon.

The locals gave him the nickname Shamwari which means friend. This was a man who was a happy, peace-loving soul. He cared about his country, loved his family and was good to his workers. He was married with 2 boys. He was a farmer in the volatile climate of Zimbabwe. In the early days of his farming life, he mostly grew tobacco. He built a new kind of curing barn for the tobacco crops which was hugely successful. Being a labour intensive crop, however, he switched to less labour intensive crops like maize, wheat and sorghum when the Mugabe regime introduced high minimum wage laws that made labour-intensive crops unprofitable.

He loved horses and rode almost every day. On one of my many visits as a teenager, he taught me to ride. I remember one particular day, we rode for about 2 hours as he showed me the changes he wanted to make around the farm. I could hardly walk the next day but it is still one of my favourite times with him.

His sense of humour was amazing -when his youngest son was born, they called him Robin Glenn. On the way home from the hospital he was singing Robin Hood, Robin Hood riding through the glen much to his wife’s disapproval. Made me laugh though! I remember one particular incident on the farm and smile very time I think of it. My younger brother had brought his best friend on a visit to the farm this particular day. There were two half-grown piglets and he offered $5 to anyone who could catch one. The 2 of them kept us amused for 90 minutes trying to catch a pig! When they finally gave up, he walked towards the piglets and called and they came running up to him! They were quite tame having been hand-reared from young.

One day, I shared with him my story of years of abuse! He did not offer platitudes – he never said a word – just cried with me. I will never forget the impact of that moment.

During the Rhodesian bush wars, he was called up and became a member of the elite Grey Scouts – the horseback division of the armed forces. He had a few narrow escapes even having one of his horses shot under him. He would have preferred to be on his farm but never tried to shirk what he believed was his responsibility to protect his nation.

One dreadful day in March 2002, he was brutally taken from us. Tortured and beaten beyond recognition, he was then tied to a tree and shot in the head. Pictures of his little dog lying next to his blanket covered body shot around the world and there was hope that this might bring change to Zimbabwe through international pressure, but nothing changed. If anything, things have become worse. But what happened to him matters – to me and my family. A part of me died that day and changed me forever.

Was he perfect, no not at all. He made huge mistakes but he also made a difference in the lives of those he knew.

He was my big brother and I loved him!