Each year I try to choose a word that sums up something I need to work on. At the end of last year I was wondering what my word for 2016 should be. I had a few rattling around in my head but I couldn’t settle on one. I was scrolling through Facebook and came across a post by one of my sisters and suddenly I knew what my word had to be and I was less than excited about it. A little later that day, I was speaking to my friend D and what she said seemed to confirm I had hit on the right word for me.

So my word for 2016 is forgive. My first thought was that I am in for a world of hurt with a word like that. I had that same thought when a friend said her word for the year was trust and I almost felt bad for her and the challenges I was sure she was in for. Now I would almost prefer her word to mine. 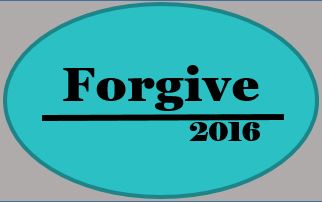 As I began to think about forgiveness, I found this quote by CS Lewis: if we really want to learn how to forgive, perhaps we had better start with something easier than the Gestapo. So yes, I realise I need to start small and graduate to the bigger issues. So some of the questions I will be looking at as I start on this journey are these: What is forgiveness? Who deserves forgiveness? Are some things unforgivable? What is the price of not forgiving?

Ignoring things is no longer an option for me. Anne Lamont says ‘We have to admit the nightmare and not pretend it wasn’t heinous and agonising . It wasn’t a metaphor.’ She also says ‘Pretending that things are nicely boxed up and put away robs us of great riches.’ I have tried pretinding and it is not working for me anymore.